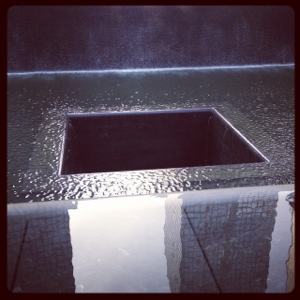 Though I’d still consider myself a tourist in New York, I’ve been happy to have my dad visiting, since it makes me feel like a relative expert.

Watch how I navigate, wraith-like, amongst the Times Square dumb-gazers! Witness my savvy exit off the subway after I realized we were going the wrong direction! Examine my closely held beliefs that the city is best viewed from the water! Let me regale you with my tale of how, that one time (literally), I yelled at a cab driver for taking the long way.

I mean, I’m carrying a freaking GPS, dude. I’m the blinking blue dot on this trip.

Yesterday, my dad and I trekked up and over to the Intrepid, a retired aircraft carrier from World War II. At the time, it was the largest one ever built, and it carried around 3,000 men.

As the son of an Army General, my dad grew up all over the world, and on vacations from boarding school, when asked how he wanted to visit his parents who were stationed in Vietnam, he always chose ocean liner.

And on this particular carrier, they’ve docked the Enterprise, a space shuttle built as a test model. They strapped the thing to rockets for vibration tests, shot it into the air, but it never crossed the atmosphere, so wasn’t clad in the carbon tiles used to keep such a craft from flying apart.

It’s kept in this inflated bubble. We took pictures – Smile! You’re standing in front of the Shuttle! – and then went back out onto the oven-like surface of the carrier and stared at a Stealth bomber.

Inside the hangar deck, the ship has been transformed into an interactive, family-friendly experience. For example, The Kamikaze Experience.

Apart from sounding like something that should have been in 50 Shades of Grey, The Kamikaze Experience is a retelling of November 25, 1944, when two Japanese planes crashed into the Intrepid, killing 69 and wounding 85.

My dad and I sat on the floor and watched actual footage intercut with two actors portraying men on the ship. I believe the word “Jap” was used twice. Smoke issued forth from the floor and surround sound made a lot of crashing noises. It felt, if I’m being honest, downright jingoistic.

Now, I have deep respect for the people who risk their lives so I can write whatever I want. I try not to take my freedom for granted. They sold “Authentic Dogtags” in the Intrepid giftshop (Personalize yours! Be creative!), and I found that profoundly insulting.

But I looked around at the number of Asian faces who were having the Kamikaze Experience, and wondered how many were Japanese, and how they felt when they had smoke blown in their faces and racist propaganda hurled at them. Sign of the times, blah blah blah. We could have done without those two actors entirely, and would have been just fine. Probably better.

By 1944, all the Japanese folks (only 1/16th necessary!) had already been locked away in internment camps for two years.

The Kamikaze Experience illustrated some true heroes. Men who leapt into action and risked life and limb to save each other. My problem was in how the story was told. Just the facts, ma’am. They’re powerful enough.

Later that day, after a gorge in Katz’s deli, my dad and I went to the World Trade Center Memorial. We started the morning with a warship, and finished that evening gazing mutely into the abyss.

The two pools are designed so you can feel the water just as it’s about to course over the edge. For me, the memorial evokes ideas of infinity, light, and very present darkness. That you can touch an element representing all three is quite an experience.

The kind of experience I prefer.