This past Halloween, C and I won a costume contest.

I haven’t dressed up for Halloween for…..ever. It’s been at least a decade. Which makes me feel and sound ANCIENT.

But we were going to a friend’s party and didn’t want to be totally lame. Which it kind of is, you know, if you’re invited to a costume party and show up in your jeans and t-shirt. Way to make an effort. Even a paper mustache is something.

So C had a great idea, and I own two glue guns, and we showed up feeling downright festive. And then, because there was a category for couples, we stood in front of a bunch of folks who clapped their approval and we actually won.

Winning feels good. Even if you didn’t plan on competing. Is there a name for that? The surprise win? It’s like getting a gift basket of compliments! From strangers! With no agenda!

And we wore our costumes for the rest of the night. Even to a swanky little speakeasy bar that’s notoriously difficult to get into. Where I had a very tasty drink. That made my glass VERY half full. 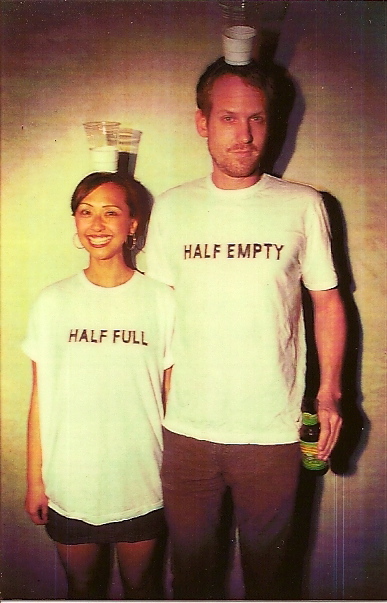